§ 9.4.2 Definitions. [1]
As used in this chapter, the following terms shall have the meanings indicated:

FIREARM
Any weapon, whether loaded or unloaded, which is designed to expel a projectile by the action of an explosive, and includes any such weapon commonly referred to as a "pistol," "revolver," "rifle," "gun," "machine gun" or "shotgun." Any weapon which can be made into a firearm by the insertion of a firing pin or other similar thing, or by repair, is a firearm.

LOADED FIREARM
A weapon with the chamber containing either a live round of ammunition or a live blank round, or a loaded magazine or clip is inserted into the weapon. A weapon that has an empty chamber and an empty magazine well is considered unloaded.[1]
Editor's Note: Amended at time of adoption of Code (see Ch. 1.1, Code Adoption).

§ 9.4.3 No-discharge zone.
The "no firearms discharge zone" is defined as follows:
A. An area within the Town beginning at the Piscataqua River Bridge on Interstate 95 and proceeding north on I-95 to Cutts Road, then easterly on Cutts Road to Route 1, then southerly on Route 1 to Haley Road, then south-southeast along Haley Road to Hoyts Island Lane to the Shore of Pepperrell Cove, then turning and proceeding along the shore from Pepperrell Cove to the Piscataqua River, continuing along the river bank to the starting point at the bridge on Interstate 95.

§ 9.4.4 Discharge authorized.
The discharge of firearms within the Town in areas outside of the "no firearms discharge zone" is also prohibited, except that hunting with a shotgun or muzzleloader during the Maine open hunting season, as determined by the Maine Department of Inland Fisheries and Wildlife, is permitted.
Editor's Note: Amended at time of adoption of Code (see Ch. 1.1, Code Adoption).

§ 9.4.5 Exceptions.
Sections 9.4.1 and 9.4.3 of this chapter do not apply to the following:
A. The area bordered on the west by Route 1, on the south by C.M.P. power line right-of-way east to Norton Road, north along Norton Road to Miller Road, east to Bartlett Road, north on Bartlett Road to Payne Road;
B. Law enforcement officers acting in the performance of their duties;
C. The use of blank cartridges for a show or theatrical production or any supervised educational program;
D. The use of blank cartridges or signal cannon for ceremonial purposes or athletic events or by military organizations or service groups;
E. The use of a firearm for legal self-defense or excusable homicide situations;
F. Testing by a professional gunsmith into a suitable container, backstop or target as approved by the Police Chief or his/her designee; and
G. Discharge of firearms for protection of property from wild animals as authorized by 12 M.R.S. §§ 12401 and 12402.

§ 9.4.7 Violations and penalties.
Any violation of this chapter will be assessed a penalty under Title 1, Chapter 1.3. 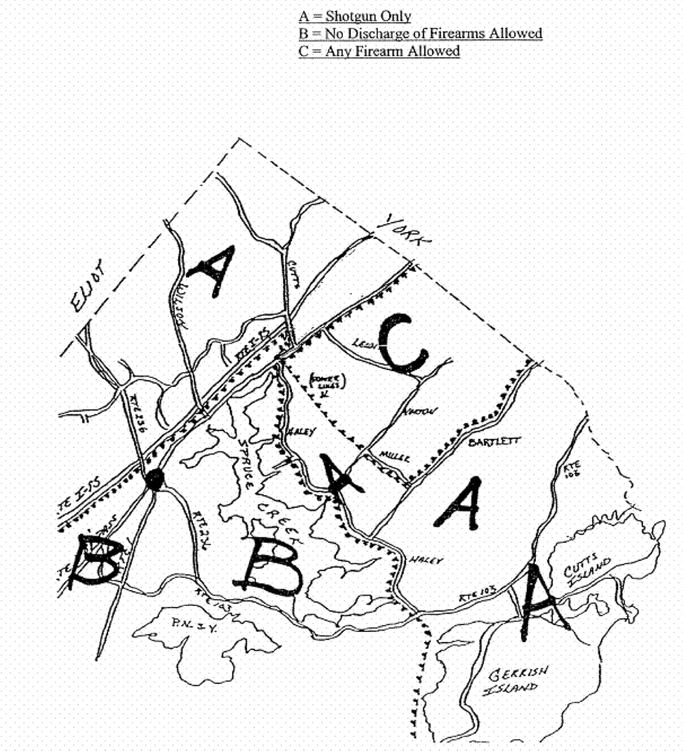